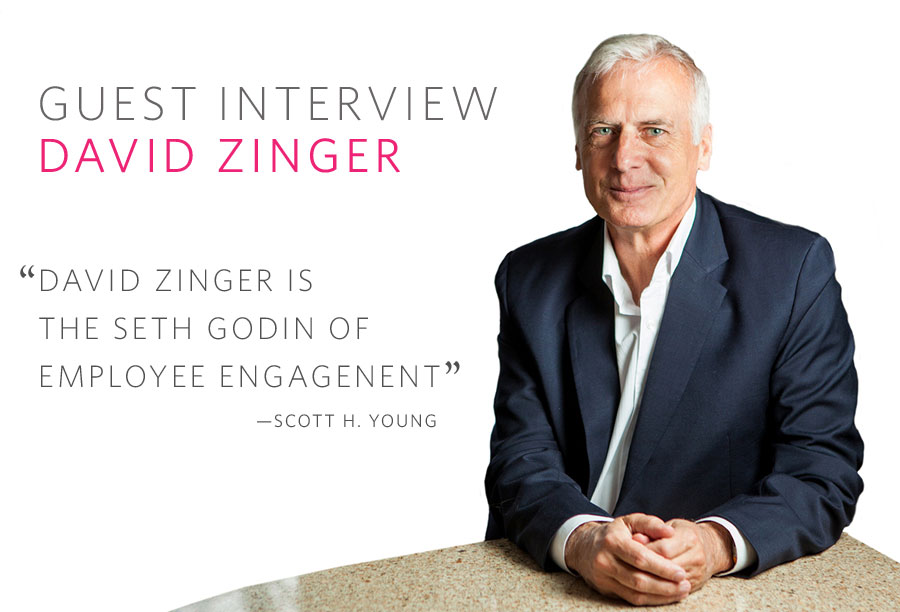 Hope you got a chance to check out Part 1 of our interview with employee engagement expert, David Zinger. Here’s Part 2 of our C0-Founder & Creative Director, Mike Lepis’s interview. If you missed it about David, he’s been named “the Seth Godin of Employee Engagement,” David is an expert, author, educator, and speaker on employee engagement. He’s also the founder of the Employee Engagement Network. David’s a great Twitter follow at @davidzinger.

ON EVIDENCE OF EMPLOYEE ENGAGEMENT…

MIKE LEPIS (ML):  Let’s talk about evidence. There are tons of infographics and bright and shiny data out there. What have you seen as compelling practical evidence for the positives of employee engagement?

DAVID ZINGER (DZ): The problem with shiny infographics and technology is we can make everything look good, and we can give a business case for just about anything. I could probably give you a business case of why you should be wearing a ring on your left little finger. But ultimately, I think the evidence goes back to the experimental. Out of academia and other sources, there are a number of indicators and strength-based conversations that performance seems to have great potential to increase engagement. High quality interactions at a frequent level seem to have capability to increased engagements. Conversations and manager intervention around programs and setbacks seem to have a great impact on engagement. Meaningfulness and work that is not given (rather is co-created in conjunction between the people who are working there) seems to have a strong impact on engagement.

The Buddha, many years ago said, “Be a lamp unto yourself.” We do need more people that aren’t cynical but at least skeptical, and I think there’s at times, not enough skepticism about the data that goes around. When you can have a company like Gallup say that only 7% of the workplace in certain places are engaged, and yet another consultancy goes in and says 50% are engaged…Who’s right and who’s wrong? I don’t know to be honest with you; unless you start to test that.

I go around audiences and say “I’ve been told in your [country],” in Singapore for instance, “that the level of engagement is [X] to be very low.” I worked with 49 people the last time I was there a couple of weeks ago, and I said, “Who’s ever disengaged in this room, could you raise your hand?” Nobody raised their hands. There should have been. There should have been 40 people who had raised their hand. Now, is it safe to raise your hand if you know, can you actually declare disengagement? Why shouldn’t you?

Disengagement shouldn’t be a punishable affair. It should be a trigger to a conversation. But I’ll go, I’ll be in a group of 300 and I’ll ask the disengaged people to raise their hands and if I get more than one or two people, I’m lucky.

ML: There’s lots of nuance to what you just said there; but, a lot of it’s corporate ego. They’re either afraid to do this or managers or directors just don’t want to hear the truth. You know they have to answer up; and if you’re uncovering this honest statistic, do they really want to know the truth? You know that’s one of the challenges. Is it good enough? Does it get it out there? Does it make me look good? Not that everybody’s so self serving in that way, but there are some human factors to uncover data for workforces.

WHAT DO YOU THINK?

A great conversation with David. Thanks! He raised a lot of important issues around employee engagement. What do you think? We’d love your comments!

nextHalloween Treats at Vignette: A Retrospective