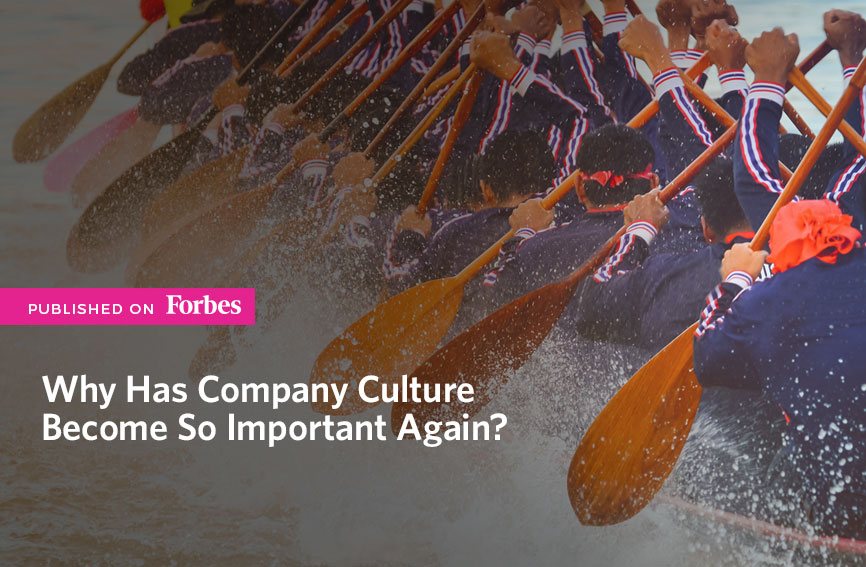 When the term “company culture” first became widely used in the 1980s and early 1990s, companies largely took a standard, top-down approach to everything. They had greater control over the public perception of their brands and the internal attitudes about their management styles. Higher-ups supplied entire companies with pre-fab thoughts about how employees should act and feel around where they worked. The suits assumed their subordinates were engaged and compliant because their feedback channels were limited to sporadic questionnaires and not-necessarily-truthful reports.

In the past 20 years, technology has effectively “flattened” every organization. Now, execs can see what employees are saying and doing, and vice versa. Everything about the way we do business has changed. And if a company must transform to keep up with the changing marketplace, then culture must also transform to support that new model.

People, in general, are more autonomous and informed than they used to be, which means companies are no longer in control of their brands. Consumers drive perception and companies try to influence and shape that perception. It’s similar with internal culture. The employee’s idea of what it’s like to work for the company controls the culture and leaks into the recruiting process, mutating the company’s DNA from within.

The Alternative Board 2016 Small Business Pulse Survey shows that 93% of entrepreneurs believe that promoting company culture is good for productivity and creativity. Business owners who identified their company culture as strong were more likely to believe that success depends on the quality of the employee experience, a focus that, they believe, increases profitability and delivers results.

But even business leaders that recognize the importance of progressive company culture initiatives might hesitate to tackle the process head-on. Meaningful change often involves a shift in foundational principles, which a company may have been operating on for quite some time, if not from its very genesis. Assumptions and attitudes about the way business is done can be stubborn conditions that can only come unstuck with real work. Executives want progress, not internal unrest. It’s important to approach culture with the right amount of force, and from the right angles.

At Vignette, we work with many different types of companies in many different industries. We’ve seen companies approach culture change from many stages, and with many strategies. Some choose to be proactive about managing culture, some address it only periodically and others have neglected the matter for too long, only to realize they have a lot of course correction to do.

But every organization has an opportunity to invest in continuous planning, learning and optimization. As it stands, there are three choices when it comes to managing culture:

It’s easy to see how misaligned internal communications and underwhelming employee experiences can be damaging to a company’s overall health. If employees aren’t aligned to company culture, it’s difficult for them to keep the company moving in its rightful trajectory. Now that technology has demystified some of the hierarchy, cultural breakdowns are more apparent and demoralizing than ever.

The good news is, technology has created just as many new channels inside companies as it has in the marketplace. It’s letting us see more clearly what’s actually going on, an essential tool to empower and activate employees. If the goal of company culture is to unite all agents under a unifying philosophy, then it only follows logically that everyone should be actively involved in creating it so they can lead by example, every day.

This article was originally published on Forbes.com.